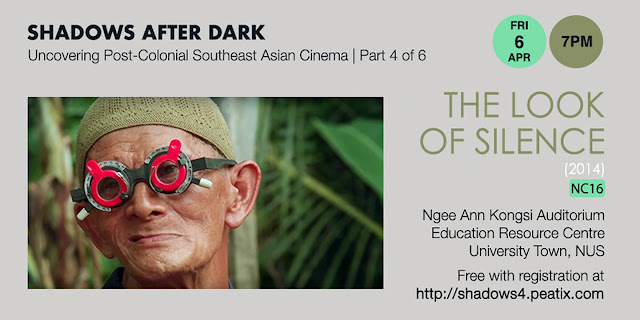 The Look of Silence is Joshua Oppenheimer’s powerful companion piece to the Oscar®-nominated The Act of Killing.Through Oppenheimer’s footage of perpetrators of the 1965 Indonesian genocide, a family of survivors discovers how their son was murdered, as well as the identities of the killers. The documentary focuses on the youngest son, an optometrist named Adi, who decides to break the suffocating spell of submission and terror by doing something unimaginable in a society where the murderers remain in power: he confronts the men who killed his brother and, while testing their eyesight, asks them to accept responsibility for their actions. This unprecedented film initiates and bears witness to the collapse of fifty years of silence.
Shadows After Dark: Uncovering Post-Colonial Southeast Asian Cinema is a lecture-film series, conceived with Dr Darlene Machell Espena, that follows a chronological development of Cold War cinema in post-colonial Southeast Asia. Consisting of six parts, this series will attempt to uncover trajectories and examine the visual culture of the period. It is organised from the discussions around the exhibition ‘Who Wants To Remember A War”: War Drawings and Posters from the Dato’ N. Parameswaran Collection.
Image: Film still from ‘The Look of Silence’ (2014). Copyright of Signe Byrge Sørensen – Final Cut for Real (Denmark).
Email Post
Labels: Darlene Machell Espena Film Screenings Joshua Oppenheimer Programmes programmes-2018 Shadows After Dark Series