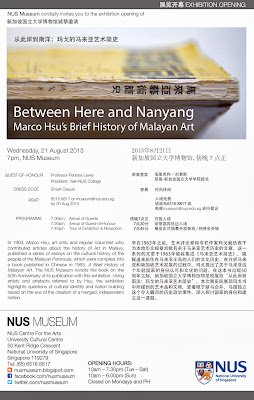 About Between Here and Nanyang: Marco Hsu's Brief History of Malayan Art

Exhibition Period: 21 Aug 2013 till 2015
Venue: ﻿﻿﻿South & Southeast Asian Gallery, NUS Museum
In 1963, Marco Hsu, art critic and regular columnist who contributed articles about the history of Art in Malaya, published a series of essays on the cultural history of the people of the Malayan Peninsula, which were compiled into a book published in Chinese in 1963, A Brief History of Malayan Art. The NUS Museum revisits the book on the 50th Anniversary of its publication with this exhibition. Using artists and artefacts referred to by Hsu, the exhibition highlights questions of cultural identity and nation building raised on the eve of the creation of a merged, independent nation.
Co-Curated by Chang Yueh Siang, NUS Museum and Dr Lai Chee Kien, NUS School of Design and Environment.