Review | Walking Tour Series: The Sufi and The Bearded Man 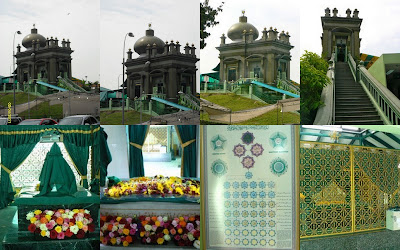 Held In conjunction with The Sufi and The Bearded Man exhibition which is currently ongoing at the NUS Museum (13 January to 2 December 2011), the walking tour through central Singapore last Saturday raised a series of pertinent questions on how one can go about conducting fieldwork on sacred geographies and urban heritage in Singapore.  Whilst there is no denying that the writing of history is marked by aspects of dominance and resistance, we also need to acknowledge that history is marked by silences in the archive which need interrogation and at the least, acknowledgement. Whilst historians are beginning to recognize the potential for oral narratives (a point that tour leader Teren Sevea continuously made during the tour) as credible (albeit “alternative” sources), some questions loom: who gets known in and as history? Who are those groups or figures or events of whom history is ignorant? What sort of questions can museums raise about such silences? Where for instance, does the museum draw the line between what constitutes “fact” and what seems feasible possibility?

A quote from Richard Winstedt (the colonial scholar-bureaucrat) to end this entry:

Syncretism has made the Kernel of many traditions hard to discover. Living saints often bear the hallmark of some physical peculiarity: one has hairy uvula, another is a dwarf, another is short-sighted, and another has half his tongue black. All have mysterious powers and some can perform miracles. One mark of the dead saint is saffron-like fairness of his corpse:  another mysterious separation of the head and foot stones of his grave.  The traditions here collected contain many details of interest to the student of primitive religion and magic. It is to he hoped that other enquires may add to these records of the karamat of Malaya.