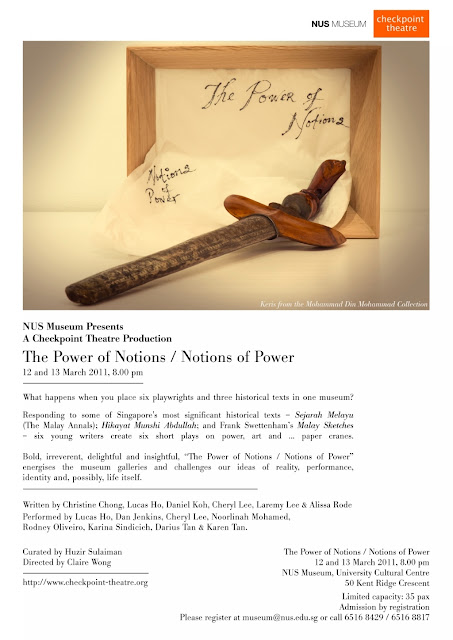 Thank you for your interest. The performances for both nights 12 & 13 March 2011 are fully registered.


The show is a collaboration between local group Checkpoint Theatre and the current and former students of NUS. It will feature six different performance pieces within the space of the museum.
Each performance is set to be a refreshing interpretation of and response to three of the most significant texts in Singapore's history - Sejarah Melayu (Malay Annals), Hikayat Munshi Abdullah and Frank Swettenham's Malay Sketches.

'There are six very different performances that invoke not just texts and their interpretation but also concepts of kingship, memory, history, artistic authority, narrative, fame, and art-making,' curator Sulaiman explains in an e-mail response.

The Power of Notions/Notions of Power is directed by actress-director Claire Wong whom many may recall for her role in Glen Goei's film Blue Mansion.

According to Wong, the six-piece show is very much like a guided museum tour. But instead of looking at passive artefacts, viewers will be treated to live performances unfolding before their eyes and within the spaces of a museum.

Just as how a museum would have its different sections and galleries operating on a separate theme each, these six performances will act as different checkpoints along the tour and every piece is set to operate rather differently from one another.

Sulaiman reveals: 'Some pieces will actually require the audience to participate.
'NUS Museum has been very proactive about wanting to explore the ways in which exhibitions, museum spaces, histories, literature and performance can intersect and feed off each other.'
Apart from the six playwrights, the series will feature a cast of seasoned performers that include Karen Tan, Daniel Jenkins and Noorlinah Mohamed.

The Power of Notions/Notions of Power is set to debut on March 12 and 13 at the NUS Museum as part of this year's NUS Arts Festival. Each show will begin at 8pm on both days.