Tan Jia Yi is a second-year NUS Faculty of Arts and Social Sciences student, majoring in History. During her time here as our Exhibitions Intern, Jiayi has assisted our museum curator Sidd Perez in our prep-room projects 'After Ballads' and 'Of Place and Paradox'. 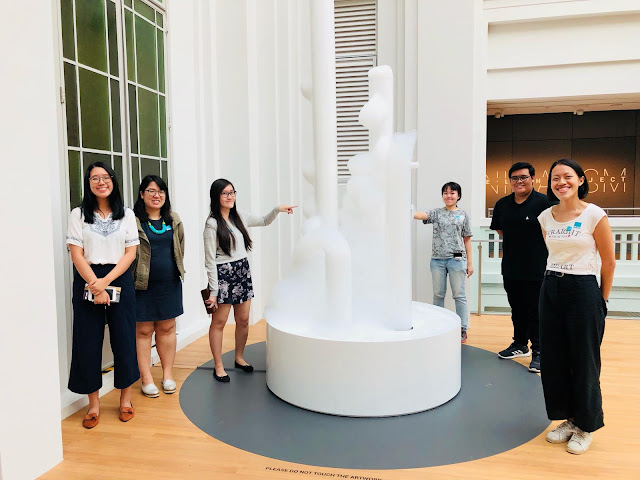 The interns of December 2018! Sneakily entering the open grass area of UCC Level 3 only to find out later it was in fact not secure ground. We might have all died in this really smiley photo. Dark times indeed.


As an Exhibitions intern, I came into the job relatively fresh. Some fellow interns had previous training in Art History or worked in museums before, but I was a total green horn. Throughout the one month, this inexperience has both challenged me and gave me an edge in creating new concepts. On one hand, there were many tasks in exhibitions I had never even knew of, much less done, like exhibition wall descriptions and exhibition kits. Yet on the other hand, I was able to create a new form of curatorial text using quotes from readings because I was not acquainted with a format.

These behind-the-scene jobs culminated in a larger task of rounding up on the two prep-room projects, “After Ballads” and “Of Place and Paradox”. The odd thing about my stint in these two prep-rooms was the sheer contrast of experience with previous interns. The latter often interacted heavily with artists and events, as seen in their blog posts. Yet, I had met the artist of “After Ballads” (AB), Fyerool Darma, maybe once or twice. I recall meeting him and shaking his hand, yet knowing extensively about his visions for AB, his voice for transcripts and the performances he had put up for previous iterations of the exhibition. It was an uncanny moment. I was instantly reminded of a previous transcript I did, where Fyerool was conversing with the head of the museum, Ahmad Mashadi. Ahmad mentioned to Fyerool that he had become an “anthropological body in circulation”. How ironic it was that in my internship, he had developed further as this image of a body in circulation—me learning for weeks on end about him in his absence. 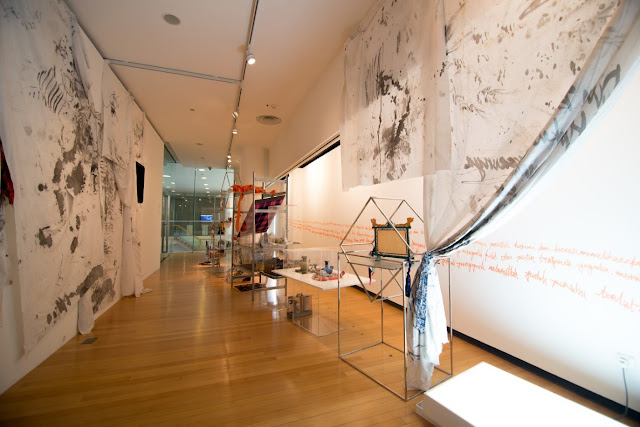 The After Ballads of the past, looking clean and pristine compared to the ordered chaos I stepped foot in. This picture amazes me when I compare it against the now. To Fyerool who once made the offhand comment when we were staging a curatorial intervention, “I really made a mess huh?” Yes, but it’s not a bad mess.

Moving on from my work, I also have to thank my fellow interns and the staff of NUS Museum. The other interns, Nik, Steph, Tess, Khai and Yati in Baba House were great company, especially when there was always much banter, gossip and funny anecdotes all round. Not only acting as good company, they were also advisors who shared with me about Franz Fanon in my readings, taught me how to operate the (confounding) printer and figuring out the Nescafe coffee machine together. So thank you to all my friends. 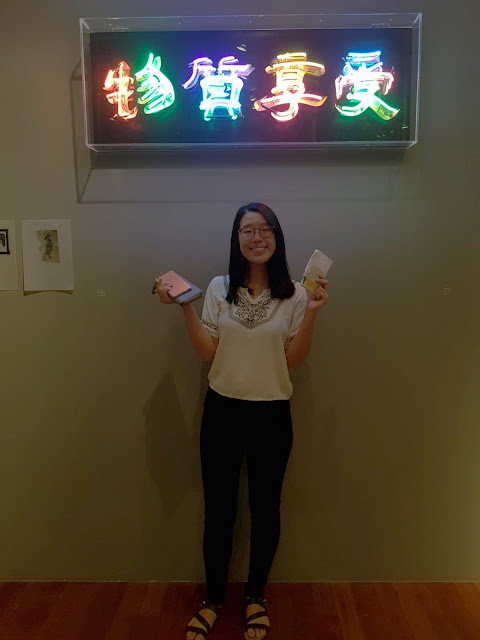 The interns mandated each other to take a photo here. [Translation of the sign: enjoyment of the physical/material] For what reason? None actually, we just thought, “Hey, seems like a good picture to use for the intern blogpost.”


Next on, my supervisor Sidd has been invaluable in guiding me throughout this internship. I would first say sorry about the endless slew of emails I sent and also the sizeable number of enquiries I had about nearly everything. Nonetheless, Sidd has guided me closely throughout the process and even accommodated in using some of my work within the AB exhibition (re: curatorial text aforementioned). Moreover, I would also like to thank Michelle, my other supervisor, who has been incredibly helpful in creating an interesting internship programme. She had planned informative workshops and fun museum visits (ACM, NGS et cetera) that provided us with a wider perspective of the museum ecosystem in Singapore. The rest of the staff at the museum, the outreach ladies, wardens and security have also been incredibly kind and tolerating of our intern shenanigans. Lastly, thanks to everyone including the CFA staff who opened the doors for us multiple times a day. We know it was a real inconvenience for them, so thank you.

So goodbye NUS Museum internship, it was a good time.