Sara Lau is a third-year Sociology student at the NUS Faculty of Arts and Social Sciences, with a second major in Southeast Asia Studies. As our  Programming and Exhibition Management Intern, Sara assisted her supervisor, Siddharta Perez, in exhibitions and curatorial projects.

Venturing into the NUS Museum and this internship, I sought to reconfigure my modes of understanding and obtaining knowledge, giving attention to phenomenological experiences alongside the readings of text. I wanted to build visual and spatial literacy, to learn how space can work with objects and text to create different textures in an exhibition, and the dynamism that comes with the dialogue between different mediums. The NUS Museum was the perfect space for these encounters, considering how the museum plays heavily on the absence and presence of text in the construction of exhibitions and prep-rooms. 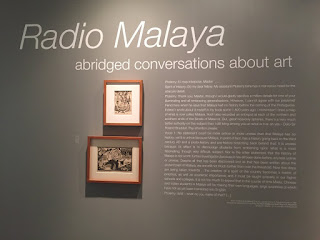 My first encounter with the museum was through this exhibition. The first thing that struck me was how heavy the whole exhibition felt, packed with artworks and artefacts with few explanatory texts to act as guides or buffers. I initially found this exhibition to be intimidating and overwhelming, and up to now, it is still challenging to talk about. There is meaning to be found in the eschewing of explanatory wall text in favour of allowing other kinds of text into the space.

The exhibition as a whole is structured around the histories that can be propagated using art and artefacts. Rather than providing a fixed and directed narrative, not including wall text allows the viewer to piece together their own version of history, while the texts on the walls and in the guides act as suggestions and possibilities, non-authoritative texts that allow the artworks and artefacts to speak for themselves, and to each other. 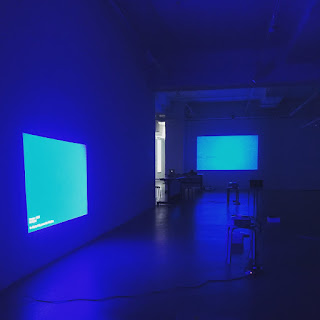 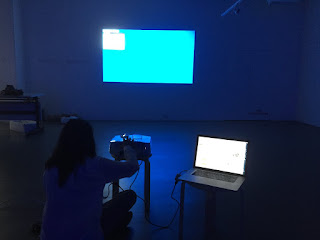 Visual mapping through light and lines

My interaction with this exhibition was rather fleeting, but what was memorable was being able to be present while the layout for the space was being discussed between the curator, Siddharta Perez, and one of the collaborators and artists, Adrienne Joergensen. Working mostly with light, rather than physical objects and artworks, provided a whole different set of challenges. I was able to witness a small part of the curatorial process, observing how Sidd and Adrienne sought to configure the projection and television displays to fill up the vast, cavernous space, while also considering the specific aesthetic of each artwork and how they would work together as a whole.

Much like Radio Malaya, extracts from Alexander von Humboldt’s Views of Nature were used in placed of wall text, providing insights into the conceptual framing for the exhibition rather than strict dictation and explanation of each individual work. These extracts also serve to act as a thread that runs through each artwork, and perhaps help the viewer to consider the individual artworks in relation to one another, and in the larger context of the expedition project.

Buaya: The Making of a Non-Myth 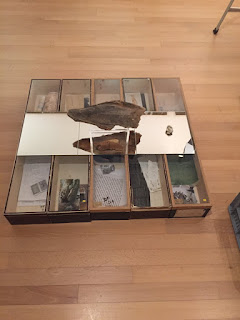 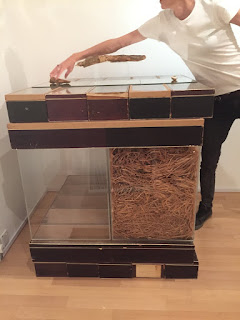 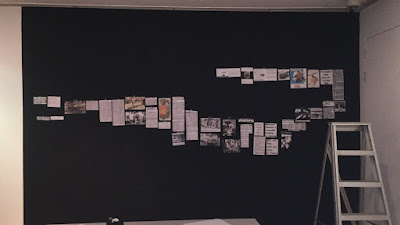 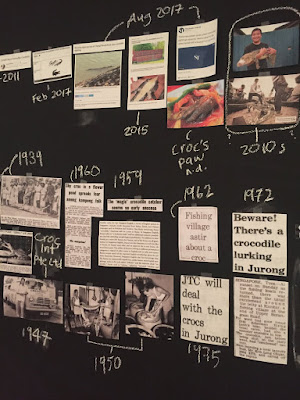 The prep-room projects I worked on allowed for more tactile experiences in handling objects and putting displays together, working alongside the artists. For Buaya, I was able to work with Kate Pocklington, an artist and conservator, in how to display various installations in her prep-room. Having to configure physical objects and also treat text as object was quite new to me, but also a healthy challenge and exercise that I believe allowed me to be more attuned to space and the aesthetics on an exhibition/artistic project. Not only did I have to think about how to best present it logistically (considering the public nature of the museum), but also conceptually, in figuring out the ways we could convey the history and the metaphorical weight of the crocodile in Singapore. 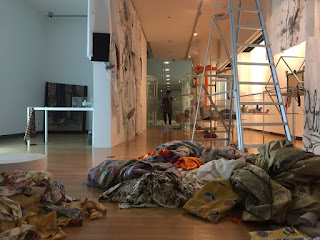 In the process of painting a space

The project that prompted me to think and write about this relationship between text and images in the museum would be artist Fyerool Darma’s After Ballads. This prep-room is both poetry and painting, a colourful confrontation of the spectres of colonial past that still haunt us. The space as a whole is visually sparse, but the individual vignettes are dense, filled with different textiles, iconography and images. Texts however, still play an integral role here, considering that the pre-cursor to the space is an extract from an autobiography by Munshi Abdullah.

The artist, Fyerool Darma, refers to a variety of literature and text in his practice, which translates in the methods in which he weaves words and text into the different assemblages that make up the prep-room. The words are there and they are essential, but ultimately what speaks are the portraits and the installations themselves. It is a reconfiguration, distortion and representation of text and its forms. His work, along with our various conversations, helped me to rethink the way in which I read art and texts, along with the complex ways they can be presented and distorted.

Working in the museum has also challenged me to question how and where I position myself while working in the physical and psychological museum space. As an intern, I have working responsibilities and obligations, yet at the same time I am also a student with my own intellectual pursuits, and also a friend to peers, artists and curators. How do these layers of the self overlap, and often conflict? What do I owe to art, to the museum, to knowledge, to history, to people, to myself? Where do I take my stances and stake my claims, and what are the consequences in doing so? The past few months have been a whirlwind for me to navigate between these aspects and locate myself in the complex cosmology of artistic practice (and arguably of life itself). While I still am a bit lost, I am hopeful that I will one day find stable ground to walk on, no matter how uncertain the path.

I confess that coming into this internship, I was apprehensive about my contributions to the museum, considering my lack of experience. I am thankful that the experience was fulfilling and enjoyable despite my own shortcomings, and for that I am especially grateful to my most supportive and accommodating mentor, Sidd, as well to Michelle and Wardah, who provided me with insights, respite, and much-needed effervescence. I would also like to thank artists Kate Pocklington and Fyerool Darma, as well as all of the museum staff I had the pleasure to interact with. I look forward to the next few months of collaboration - thank you all for your friendship.