Kwok Jia Yang is a first-year student at the Yale-NUS College. As our  Radio Malaya Exhibition Research Intern, Jia Yang researched on and compiled a bibliography of writings related to Jimmy Ong, a Singaporean artist, assisted in the accessioning of the Jimmy Ong "Shoebox Photographs", and researched on and conceived of an interview project of the Dragon Court period.

I began the internship wanting to experience an institutional perspective towards the arts. Each institution has a particular slant towards the conceptualization of exhibitions and shows. In particular, I sought to understand more about NUS Museum’s own curatorial approaches and processes. Additionally, I was interested in how institutions negotiated with practical real-life considerations and limitations.

Something that stood out for me in the first few days was reading an introductory essay by my supervisor, Ahmad Mashadi, on the identity and practices of NUS Museum. One aspect that intrigued me about the Museum in my prior visits was the presence of the permanent collections in relation to the other temporary exhibitions. To me, there seemed to be only a tenuous link between each show, making it a seemingly disparate experience. The essay, however, defined and framed the institution’s position in today’s context as an “interlocutor of disciplines and knowledge”. Commenting on how the selectivity in curation could sometimes construct definitive narratives that marginalized other perspectives, the dynamics of power between the institution and viewer could be characterized as almost authoritative. In this manner, the institution acknowledged the agency of viewers in conceiving independent ideas, setting itself out as a “point of reference” to provoke discourse between the public, the artists, and curatorial themes and foster an “indeterminate set of readings”. For me, this intentional fluid approach fascinated me as works from the permanent collection could be read/presented in a multitude of ways in the context of a new topic, making the institution an exciting space for experimentation. 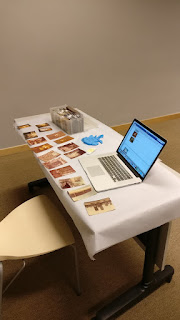 My task during the stint was to research on Jimmy Ong, one of Singapore’s foremost contemporary artists, and conceptualize potential new approaches towards the Radio Malaya Exhibition. Alongside a collection of charcoal drawings, Ong had donated a shoebox of close to a thousand photographs that he took from 1984-1997. Thus, I spent my 5 weeks constantly looking and re-looking at the photographs. This process saw me attempt to inhabit Ong’s lens and mind to understand his possible intentions in taking each photograph. At the same time, I was researching about Ong’s practice and his life, finding links between the photographs and Ong’s history, works, and concerns. Contrary to popular belief, photographs are not an objective record of reality but rather one refracted through particular sensibilities. In this manner, even if Ong was being casual about his intentions, an underlying idea still existed as to why the photographs were being taken. This whole process made me more conscious in seeing potential links between the subject matter and external concerns, forming possible entry points for further exploration. 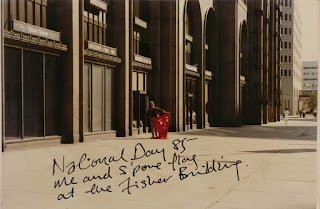 For example, a seemingly purely descriptive photograph of one individual waving the Singapore flag could potentially take on a completely new meaning in the context of one’s political concerns. With the prevalence of photography nowadays, people can be unaware of the potential underlying meanings of the images they take. My meetings with Ahmad were also helpful in discussing different perspectives and anchoring particular themes to focus on. At the end of the stint, we decided to focus on Jimmy Ong’s identities and the tension in belonging. For me, the negotiation of identity was fascinating with respect to self-discovery and normative social influences. In particular, the various personas one portrayed externally for group acceptance and conformity as opposed to one’s internal psyche. 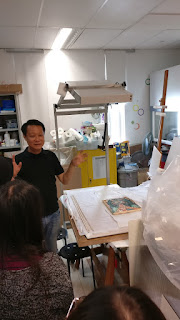 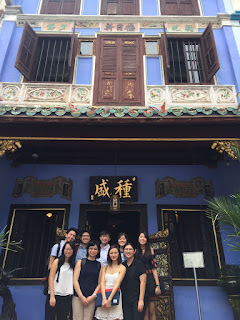 Another aspect I really enjoyed was the range of activities we underwent beyond our assigned tasks. Besides being given a tour of the NUS Museum and the Baba House at Neil Road, we also attended a conservation workshop by Donald and Lawrence. This gave insights into a practical process which is often not emphasized enough in the execution of curatorial ideas. In particular, a casual encounter with Claire, Donald, and Lawrence stood out as they were fitting and re-sizing photographic prints into store-bought frames from IKEA for a future exhibition. This allowed me to see a more physical side towards curating exhibitions beyond its mere, more lauded theoretical conceptualizations. This definitely presented a more realistic, down to earth perspective towards museology and curation.

Another activity that stood out particularly was a tour of National Gallery’s “Between Declarations and Dreams: Art of Southeast Asia since the 19th Century” exhibition by curator, Melinda Susanto. Explaining the curatorial approaches toward the selection of works, her tour allowed me to see the coherence behind a well-researched and considered approach and the links between each time period, art movement, and work, making the exhibition an enjoyable viewing experience. In the background of the recent Yayoi Kusama show, one question I was debating was the notion of consumption, access, and exclusivity. Levels of complexity exist as to the accessibility of works. Hence, should the selection of works be intentionally tailored and made simpler? Or should the process be less calculative and more genuine to the explored topic, choosing works based on its merits and yet at the same time exclude certain denominators of society? On a more realistic level, I believe the answer resides in the grey space between the black and whites. It is a constant struggle between both aspirations, ultimately decided based on the balance between practical needs and wants.

I’d like to thank Ahmad for providing key directions in our few meetings, allowing me to glean into the nuances and considerations of curatorial research. I would also like to thank Michelle for always being there for us, planning the programs and ensuring everything runs smoothly. Donald is another figure that I cannot thank enough, providing access to the Museum’s materials and giving opinions in casual conversations. A last thank you goes to Wardah, Sidd, Lawrence, Claire, the museum team, and all interns for making the past five weeks an enjoyable time.
Email Post
Labels: Diary of an NUS Museum Intern