Publication: Camping and Tramping Through the Colonial Archive: The Museum in Malaya 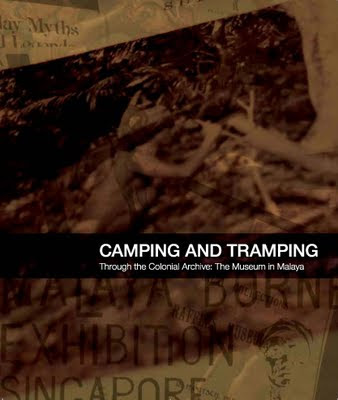 Contents
A University Museum: Contexts and Practice | Ahmad Mashadi
The 'Museum' in Malaya | Shabbir Hussain Mustafa
Of Birds and Beasties: A Lost Transcript from the Raffles Museum | Fiona Tan
Account of a Collecting Trip in the Malayan Jungles (circa 1900s) | Janice Loo
A Letter from My Friend William Willets | Eddie Koh
A Diary of the Archiver | Christina Chua

"Established around the mid-1950s before Singapore’s independence, the NUS Museum may be regarded as a prototypal institution. The passage through decolonisation, simultaneous formation of newly independent states across former British colonies, and the emergent experience of modernity in its disruptive, tumultuous and transformative forms provide a context to the Museum’s establishment and development. This introduction revisits the issues surrounding the formation of the NUS Museum in the mid-1950s – not as an explication of history, but rather – as a critique on contemporary museological practices in Singapore, primarily in relation to NUS Museum’s conditions and situations today. Through these reflections, one may also offer tentative perspectives into recent developments at the NUS Museum over the past four years (2006-2010), in particular the curatorial and exhibitionary approaches defined by its contexts and predicaments."

"Collectively, these various exhibitions, their objects, and modes of display are to be seen as vast matrixes that provide a dynamic experience that opens possibilities across disciplinary and theoretical frames. To aid such transactions, exhibitions in their collective are also to be rendered a discursive space of curating that necessitates various authorial interplay – use of narrative, counter-narrative and non-narrative; order and chaos; direct, ambiguous and ambivalent – builds complexities and promotes questioning. Camping and Tramping and its companion exhibition, The Sufi and the Bearded Man, function as this transaction between the Museum’s permanent and temporary exhibitions, each contextualising and problematising the other. The former is conceived to account the rise of the museum in British Malaya and in doing so stages a re-encounter with the NUS Museum as a historical entity, placing it in relation to historical developments and colonial policies since the late 19th century and key institutions such as the Raffles Museum and Library. The idea of the museum, often imagined as a project of nation and modernity, is held unstable, contingent on shifting contexts and predicaments, their perceived publics, and assumptions on objects and their meanings. The latter exhibition, The Sufi and the Bearded Man, is conceived to prompt discussions regarding the entry of objects (and their associated events) into the museum and the limits of museum as a public institution. In relation to this essay, central to these projects is the mapping of the Museum, its ontology, problematic and prospects, drawn in relation to a curatorial undertaking that proposes archival regard for collections and materials. Placed within these exhibition spaces are textual materials that underline the vast and open terrain of interpretative possibilities that may work alongside, obfuscate or even challenge the curatorial positions defined in the exhibitions. Organised alongside these exhibitions are a series of talks and discussions involving artists, curators and academics, conceived to generate perspectives, or even further collaborations.”

- EXTRACTS from Ahmad Mashadi, “A University Museum: Contexts and Practice” in Camping & Tramping Through the Colonial Archive: The Museum in Malaya, NUS Museum, 2011.

To order our publications, please write to museum@nus.edu.sg